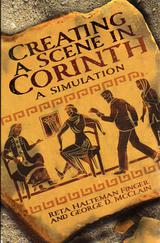 Creating a Scene in Corinth:

Creating a Scene imaginatively draws readers into Chloe's house church, which has just received a letter from their church planter, the apostle Paul. Using group simulation, the book brings to life scholarly research on how the gospel penetrated the Roman Empire. As participants role-play early believers and debate with each other, they gain new insights and will never read 1 Corinthians the same way again.

First-century Corinthians were just as human as church people today. They did not consider Paul's letters authoritative Scripture when he wrote them, so lively group discussion and debate are encouraged. This method of Bible study works for many levels, from youth groups to Sunday school classes, or in college and seminary courses. Besides, it's just plain fun!