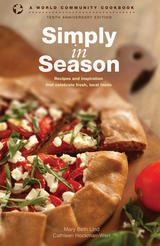 Simply in Season serves up more than three hundred recipes organized by season, along with a popular and expanded fruit and vegetable guide. This 10th anniversary edition transforms a beloved cookbook with recipes and stories linking food and faith into a visual masterpiece with colorful photographs to help cooks—novice to seasoned—learn how to prepare local and seasonal produce.

Part of the World Community Cookbook series published in cooperation with Mennonite Central Committee. Proceeds help support this worldwide ministry of relief, development, and peace. Royalties from the sale of these books go to nourish people around the world.

A Leader's Study Guide is available separately.
"In this era of the 'locavore,' Simply in Season offers creative and nutritious recipes that will inspire experienced cooks and initiate culinary newcomers alike."—Lisa Weasel, author of Food Fray: Inside the Controversy over Genetically Modified Food

"This underground bestseller deserves mainstream attention. It's a terrific book for those who wish to cook seasonally using locally grown foods. Most other cookbooks tend to assume you can get corn year round. In this one, it's a summer crop. All the recipes speak directly to the season in which we can buy, or better still, grow them."—Anita Stewart, author of Anita Stewart's Canada: The Food, The Recipes, The Stories