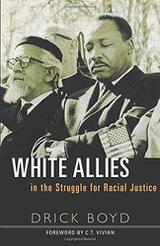 White Allies in the Struggle for Racial Justice

This inspiring book tells the little-known story of white Americans who broke with a racist culture to become allies in the struggle for racial justice - from early abolitionists to partners in the civil rights struggle, and contemporary figures of our own time. The point is not to make white people into the leaders or "true heroes" of this history, but to challenge the idea that racial justice is just a concern for people of color, and to show that there are and have been white people who took up this challenge, often at great risk.

At a time of renewed attention to the ongoing scourge of racial injustice, the stories in this book are intended to inspire, raise consciousness, and motivate action on behalf of equality and human dignity.

Among those profiled are:

Study questions and a short bibliography are included at the end of each chapter.