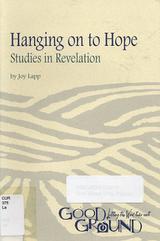 Hanging on to Hope: Studies in Revelation

by Joy Lapp
Part of series:

Is God still in control of the world? Will evil ever be defeated? First century Christians faced these and other questions as the Roman Empire spread its oppressive influence. John, exiled for his faith, writes a book full of visions and fantastic images, bringing assurance to the beleaguered believers. In this study, some of the mystery of Revelation is unlocked, the early Christian dilemmas appear remarkably like our own, and we get a refreshing glimpse into God's ultimate reign.