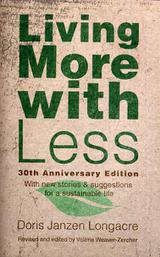 Written in 1980, before living simply and "green" became trendy and popular, Living More with Less was a practical guide for living in simple, sustainable, and healthy ways—ways that keep the future of the planet, and the plight of poor people, in mind.

Thirty years later, Living More with Less: 30th Anniversary Edition is being released as a way to celebrate and honour Longacre, who died of cancer in 1979 at the age of 39, before she could complete the original manuscript.

In addition to Doris' original reflections on themes such as doing justice, learning from the world community, cherishing the natural order, and experiments in nonconformity, Living More with Less: 30th Anniversary Edition contains new and updated essays, reflections, inspiration and practical tips in areas such as money, homekeeping, gardening, cooking, clothing, transportation and technology.

Living More with Less: 30th Anniversary Edition collects the wisdom and experience of those who live with less than a consumer culture says we need. With stories, reflections, and advice from people around the world who are making changes to their daily habits in response to climate change and global poverty, Living More with Less 30th Anniversary Edition is a vibrant collection of testimonies, old and new, of those who are discovering the joy of living with enough.