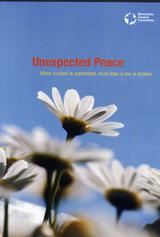 Anne Marie Hagan was 19 years old when her life changed forever. Her father was murdered in a violent attack by a young man in the neighbourhood in the tiny community of Kingman's Cove in Newfoundland.

For most of the next two decades, Anne Marie lived filled with anger, resentment, bitterness...in an emotional prison that many victims of crime experience. She learned that when a crime is committed, more than a law is broken. Ironically, she only became free 17 years later after she met and forgave the man who had killed her father.

She didn't intend to forgive him but to her surprise that internal emotional shift freed her up to enjoy life again and to feel some inner peace. Anne Marie took part in a process known as victim-offender mediation, just one type of Restorative Justice practice being used today.