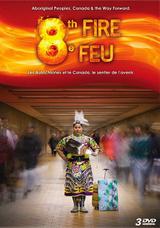 During the four-part series, host Wab Kinew, from the Ojibways of Onigaming First Nation in Northern Ontario, and now a Winnipeg-based TV journalist, invites us to come "meet the neighbours". It's about time, since many Canadians say they have never met an Aboriginal person.

This vibrant documentary, introduces a diverse cast of Indigenous characters, united in a shared bond as Canada's First Peoples and in their determination to reassert their culture within a wider population of non-Indigenous Canadians.

4 episodes on the following topics:

Indigenous in the City: More than half of Canada's Aboriginal population today lives in cities. They sometimes call themselves "Concrete Indians." And they are challenging stereotypes!

It's Time! If we don't improve our relationship with Aboriginal people, we will cripple our economy. In a dynamic, 2-minute walk through 500 years of history, host Wab Kinew explains how First Nations of this country were not conquered. They signed treaties to share the land, and the courts say Aboriginal people must be consulted and accommodated when anyone wants to develop their land. The boardrooms of the nation are waking up to this reality. If nothing else, cold hard economics will drive us to a new and better relationship.

Whose Land is it Anyway? There's no getting around it. Land is the biggest sticking point in the relationship. Who owns it, who benefits from it? This episode shows that there are creative ways of working things out.

At the Crossroads: Meet the feisty "Seventh Generation," young Aboriginals determined to build a new relationship with Canada. They're the first generation who didn't have the "Indian in them" drummed out by Residential Schools. They are challenging Canadians and their own leaders to get out from under the burden of old colonial institutions. They are delivering a powerful message: hope is possible and the moment for a new relationship is upon us.