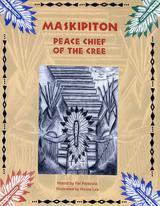 Peace Chief of the Cree

Maskipiton was a 19th century Plains Cree chief who, after his encounters with a Christian missionary and a Cree elder, was inspired to live a life of peace and forgiveness. Following the example of Jesus, he decided to lead his people on a path of peace, even in the face of evil. Based on actual written accounts by those who were close friends of Chief Maskipiton, it is a story of his love of God's word, his ability to forgive the man who killed his father, and the transformation of a man of violence to a man of peace.

Also available in French and Spanish.

Browse/Download an excerpt from the book.

A part of the larger curriculum box, Reaching Up to God Our Creator.