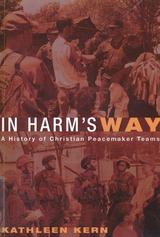 A History of Christian Peacemaker Teams

In 1984 Evangelicals for Social Action founder Ron Sider posed the questions, "What would happen if we in the Christian church developed a new nonviolent peacekeeping force ready to move into violent conflicts and stand peacefully between warring parties? . . . Everyone assumes that for the sake of peace it is moral and just for soldiers to get killed by the hundreds of thousands, even millions. Do we not have as much courage and faith as soldiers?"

Christian Peacemaker Teams (CPT) has been trying to answer those questions since 1986. CPT has responded to invitations from grassroots organizers on five continents who are using nonviolent strategies to confront systemic oppression. This book provides a glimpse into the mistakes and successes, the triumphs and tragedies, that teams have shared in with local co-workers in various nations. It also continues to pose the question, What would happen if CPT's efforts were multiplied by millions of Christians with a radical commitment to Jesus's nonviolent gospel?