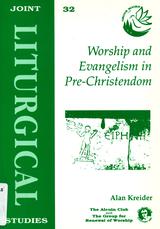 Worship and Evangelism in Pre-Christendom

Kreider writes from a historical perspective, examining Church life in its first centuries and noting the major, mainly negative, changes that developed with Constantine and the rise of Christendom. Kreider is struck not only by the lack of overt evangelism and mission in this period, but also the lack of any instruction to evangelise. Instead friendships and a distinctive Christian lifestyle, centred on love, peace and equality, led to the natural and constant growth of the Church. Rather than an occasion for pagans to be converted, as it was originally at Corinth at least, Sunday worship was entirely Christian, to the point that non-Christians were barred from entry. It was only after a lengthy period as catechumens, in which they showed a radically changed lifestyle and which was completed in baptism, that new converts were allowed to be part of the whole service and not just the preaching. Kreider argues that the purpose of this weekly worship was to help the believers maintain their distinctiveness and so continue their witness. This the elements in the service revolved around relationships, unity and exhortation. In a post-Christian (Christendom) society we can not expect visitors to make their own way to church, be converted by the preaching and join the church. We must no longer think of the Sunday Service as the 'shop-front' of the church, but as an occasion of support and encouragment for individuals and small groups to be the 'shop-front' through our relationships.