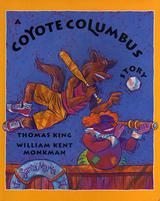 A retelling of the Christopher Columbus story from a Native point of view turns this tale on its ear! Coyote, the trickster, creates the world and all the creatures in it. She is able to control all events to her advantage until a funny-looking red-haired man named Columbus changes her plans. He is unimpressed by the wealth of moose, turtles and beavers in Coyote’s land. Instead he is interested in the human beings he can take to sell in Spain.

Thomas King uses a bag of literary tricks to shatter the stereotypes surrounding Columbus’s voyages. In doing so, he invites children to laugh with him at the crazy antics of Coyote, who unwittingly allows Columbus to bring about the downfall of his human friends. And he makes the point that history is influenced by the culture of the reporter.

The myths around the supposed discovery of the Americas need to be shattered. Who better to do it than Coyote? Written on the 500th anniversary of Columbus' non-discovery, Thomas King (Cherokee) helps us unravel the stories of first contact through the weapons of laughter and sarcasm. It's a great read for children 9 years and up. The antics of the trickster coyote show us how crazy and inhumane the dominant story of discovery really is. One caution, however, for the kids. Watch out for Christopher. He looks scary...like Elvis turned into an angry clown.