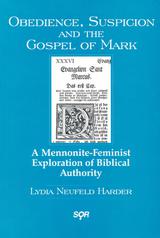 Obedience, Suspicion and the Gospel of Mark:

A Mennonite-Feminist Exploration of Biblical Authority

How do our social, political and religious commitments influence our interpretation of biblical texts? Are obedience and suspicion necessarily opposite ways to respond to the authority of the Bible? Can one criticize and be transformed at the same time?

Lydia Neufeld Harder explores these questions from the vantage point of a scholar, a feminist and a member of a faith community. She begins by clarifying the theological convictions and the discourse patterns in each of the "hermeneutic communities" that have shaped her own approach to the Bible. A hermeneutics of obedience, rising out of the Mennonite theological tradition, and a hermeneutics of suspicion, advocated by many feminist theologians, seem to represent opposite approaches to the bible's authority. The resulting polarization could easily have led to static definitions of authority and the subtle domination of those who differ from the majority. However, by focusing on the common theological concept of discipleship, Harder has constructed a critical dialogue, beginning a process of creative change in her own view of authority.

This new view opens the way for an interpretation of the Gospel of Mark - an interpretation that wrestles with the truth claims of the text while it clarifies specific hermeneutic choices. A new appreciation of both the power and the vulnerability of the biblical text leads to a view of authority that embraces both suspicion and obedience in a dynamic interpretative process.