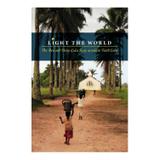 The Ben and Helen Eidse Story as told to Faith Eidse

From the wheat fields and bargain stores of rural Manitoba, Ben and Helen Eidse were the first missionaries sent overseas by their conference. On the African savannah they partnered with the Chokwe-Lunda who taught them language, culture and proverbs, which Ben used to explain salvation. Helen delivered the leprosy cure, mothered orphans, cared for the excluded, sick and poor. Their partners helped establish 80 churches, translate the Bible and run 24 clinics. They deepened their faith in spiritual battle against sorcery and corruption. The Eidses sought to empower the powerless and raise a family despite revolution, disease and disability. Back in Canada, Helen took in the homeless and Ben became president of Steinbach Bible College. As first chancellor, he continues a counseling, healing prayer ministry.