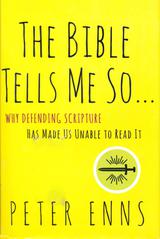 The Bible Tells Me So:

Why Defending Scripture Has Made Us Unable to Read It

Christians have been defending scripture from attack for two centuries. In fact, argues Bible scholar Peter Enns, we have become so busy protecting the Bible that we are now unable to read it. In The Bible Tells Me So, he provides a revolutionary new perspective:

"What if God is actually fine with the Bible just as it is? Not the well-behaved version we create, but the messy, troubling, weird, and ancient Bible has something to show us about our own sacred journey of faith. Sweating bullets to line up the Bible with our exhausting expectations, to make the Bible something it's not meant to be, isn't a pious act of faith, even if it looks that way on the surface. It's actually a thinly masked fear of losing control and certainly, a mirror of our inner disquiet, a warning signal of a deep distrust in God. A Bible like that isn't a sure foundation of faith; it's a barrier to true faith. Creating a Bible that behaves itself doesn't support the spiritual journey; it cripples it. The Bible's raw messiness isn't a problem to be solved. It's an invitation to a deeper faith."

Christians have had it drilled into them that their job is to defend the Bible against any challenge. But is this really God's plan? What if God wants us to debate and wrestle with what we read in scripture? In The Bible Tells Me So, Enns wants to do for the Bible what Rob Bell did for hell in Love Wins: expose Christians' fear-based contradictory beliefs and show a new way forward. Here you will find a revolutionary guide that will liberate Christians so they can truly engage with God's Word.

Also see The Sin of Certainty, available separately for loan.