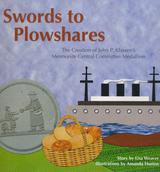 As seen through the eyes of young Isaak, a fictional character living in Ukraine in the 1920s, Swords to Plowshares shares the historical account of John P. Klassen's work as a young art teacher. Klassen gathered bullets scattered through his village and showed young Isaak how to make molds and melt bullets to create a lead medallion.

The medallion was then given to Mennonite Central Committee workers from North America in appreciation for the food and relief supplies sent to their village to ease the suffering and starvation resulting from the civil war. Through his art, Klassen shared a message of transformation from bullets to bread, from violence to peace, turning fear into courage and despair into hope.