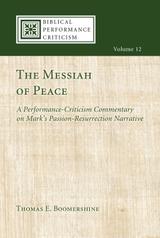 The Messiah of Peace:

The telling of Mark's story of Jesus as the Messiah of peace in the decades following the Roman-Judean war announced a third way forward for Diaspora Judeans other than warfare against or separation from "the nations." Mark's Gospel was the story of the victory of a nonviolent Messiah who taught and practiced the ways of a new age of peace and reconciliation in contrast to the ancient and modern myth of redemptive violence.

The Messiah of Peace is a performance-criticism commentary exploring a new paradigm of biblical scholarship that takes seriously the original experience of the Gospel of Mark as a lively story told to audiences rather than as a text read by readers.

The commentary is correlated with the Messiah of Peace website, which features video recordings of the story in both English and Greek. Critical investigation of the sounds of the Markan passion-resurrection narrative reveals the identity of its original audiences as predominantly Judean with a minority of Gentile nonbelievers. Hearing the passion-resurrection story was an experience of involvement in the forces that led to the rejection and death of Jesus--an experience that brought on the challenges inherent in becoming a disciple of the Messiah of peace.

Also see volume 1 in the Biblical Performance Criticism series, The Bible in Ancient and Modern Media, available separately for loan.