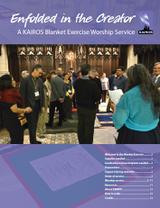 Enfolded in the Creator:

The Sunday closest to May 26 each year is marked in many churches as Healing and Reconciliation Sunday. This date begins a month of focus in churches and Canadian society on the relationship with Indigenous peoples. This date also corresponds with the anniversary of the close of the Truth and Reconciliation Commission and their Calls to Action (released on June 2, 2015). This service, however, could be celebrated at any time in the year.

This service will allow you to participate in an adapted form of a popular education tool called the Blanket Exercise. KAIROS has been using this tool since 1997 (which has been continually edited and updated) to increase understanding of the history of the relationship between Indigenous and non-Indigenous peoples in Canada. It invites a whole group of people to put themselves in the place of Indigenous peoples. While this is an active exercise involving movement, it has been adjusted for the context of a worship service with a seated congregation.