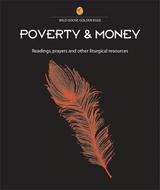 Readings, Prayers and Other Liturgical Resources

A large collection of resources on poverty, homelessness and sharing what we have, taken from various Wild Goose books.