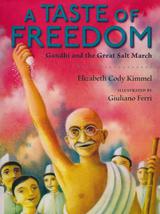 A Taste of Freedom:

Gandhi and the Great Salt March

With one small step, a great change is set in motion.

A young boy living in India under British rule witnesses the arrival of the Mahatma, the Great Soul, and event that not only changes his own life but inspires a nation. . .and the world. For Mahatma Gandhi has proclaimed that he is fighting back against British rule--not with weapons and violence but with salt.

How can salt set his people free? The boy is determined to find out and, together with his older brother, joins the Mahatma on a life-changing journey to the sea. Day after day, they walk. By the time they reach the ocean, the world is watching--as one small man takes on the biggest empire in the world.

Gandhi's famous Salt March shook the foundations of the British Empire and the world, showing the strength of a people united in peace to fight for freedom. Gandhi's march had a significant effect on changing world and British attitudes towards Indian independence, and inspired the use of non-violence in other protest movements, like the US Civil Right movement.