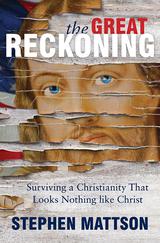 What do we do when the church looks nothing like Jesus?

Many followers of Jesus feel disillusioned by a broken religion—one that loves political power, promises prosperity, and feeds on fear. We are desperately trying to rationalize how a loving God can be connected to unloving churches, institutions, and people. We can no longer deny that our version of Christianity is not just imperfect but has been co-opted to inflict violence, racism, abuse, hate, and even death. The question before many Christians is no longer how their faith can survive within a secular culture. It’s how their faith can survive Christianity itself.

In The Great Reckoning, writer Stephen Mattson writes out of the rubble of the failed American faith called Christendom. Instead of doomsaying or casting aspersions, however, Mattson offers hope for seekers looking for inspiration, solace for Christians fed up with an unsatisfying religion, and clarity for those sifting through the remains. The Great Reckoning is a clear-eyed yet tender critique of where we’ve gone wrong, and a guide away from the culture wars and toward the life of Jesus.

Rather than further immersing ourselves in Christendom, what if we started rethinking what it means to be a Christian in the first place? What if Christians shed the hopes and dreams of Christianity and turned instead of the Christ at the centre of our faith?

Consider this a dispatch from the wreckage of American cultural Christianity, and an ode to the Jesus-looking faith we seek.

"The Trump era has convinced many people of what they've long expected: the Christian faith has been hijacked. Political agendas, corrupt institutions, culture wars, and hypocrisy have poisoned a religion struggling to emulate the person of Jesus. In The Great Reckoning, writer Stephen Mattson navigates the difference between Christendom and Christ, and offers a way back toward the latter." - Benjamin Corey, author of Unafraid and Undiluted