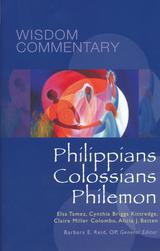 Philippians lends itself to a political-ideological reading. To take into account that the document is a writing from prison, and to read it from a political-religious and feminist perspective using new language, helps to re-create the letter as if it were a new document. In this analysis Elsa Tamez endeavours to utilize non-patriarchal, inclusive language, which helps us to see the contents of the letter with different eyes.

Cynthia Briggs Kittredge and Claire Miller Colombo argue that Colossians’s contradictions and complications provide opportunities for entering imaginatively into the world of first-century Christian women and men. Rather than try to resolve the controversial portions—including the household code—they read the letter’s tensions as evidence of lively conversation around key theological, spiritual, and social issues of the time.

Taking into account historical, structural, and rhetorical dimensions of Philemon, Alicia Batten argues against the “runaway slave” hypothesis that has so dominated the interpretation of this letter. Paul asks that Onesimus be treated well, but the commentary takes seriously the fact that we never hear what Onesimus’s wishes may have been. Slaves throughout history have had similar experiences, as have many women. Like Onesimus, their lives and futures remain in the hands of others, whether those others seek good or ill.

"Focusing on three letters from the Christian Scripture, this commentary features a unique social justice lens. A volume necessary to any preacher or teacher of these text." - Water