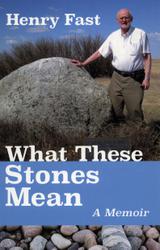 What These Stones Mean:

These memoirs are a collection of stories based on a wide variety of places, people and experiences the author has encountered in his life. From early childhood growing up on a farm on the prairies of Saskatchewan, to attending a one-room country school and being stranded in a blizzard, he eventually moves on to international development work seeking to better the lives of farm folk in developing countries. The author describes what it is like courting his future wife long distance while separated by an ocean. Along the way, Henry also shares personal reflections on the impact his experiences have made, both on himself and others.

About the author: Henry Fast was born and raised in Saskatchewan, son of immigrant Mennonite parents from Russia in the 1920s. He earned a master's degree in agricultural economics from the University of Manitoba in 1969 and worked as a research economist with Agriculture Canada in Regina for seven years. After two overseas postings (Greece and India) with Mennonite Central Committee, he was employed by Mennonite Economic Development Associates as program manager and consultant for twenty-three years, followed by nine years as Manitoba representative for Canadian International Development Agency. Henry enjoys retirement in Winnipeg with his wife, Martha. They have two grown children and two granddaughters.