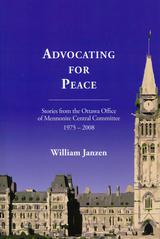 Stories from the Ottawa Office of Mennonite Central Committee, 1975-2008

In 1975, Mennonite Central Committee Canada established the Ottawa Office to monitor and interpret government policy for its Mennonite and Brethren in Christ constituency, and to undertake advocacy to government on behalf of its national and international programs. William Janzen was the first director of MCC's Ottawa Office, a position he held for thirty-three years. In this volume, he shares a rich collection of stories from those years of "advocating for peace."

In February 2019, when he was honoured in the Senate of Canada for his role, in 1979, in crafting the first Master Agreement for the Private Sponsorship of Refugees, the government's representative in the Senate, V. Peter Harder, stated, "You may not have realized it at the time, but you were pivotal in making Canada the inclusive and compassionate country it has become. Few are those who can call themselves nation builders. You, Bill, are one who can."