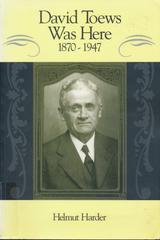 A biography of David Toews.

"Mennonites of western Canada faced many challenges in the half century of Toews' involvements which are chronicled and analyzed in this volume. In the 1890s they were still newcomers in this region of the country - indeed they were still arriving from southern Russia. Leaders were emerging in the fields of education, pastoral work, intercongregational organization, and joint ministries across the Canada-US border. But there were numerous gaps in the Mennonite frontier communities of Manitoba and Saskatchewan that needed to be filled. David Toews helped significantly to do just that." From Foreword by Lawrence Klippenstein.

Includes Toews' involvements in the founding and administration of Rosthern Junior College, Conference of Mennonites in Canada, Canadian Mennonite Board of Colonization.

A 2nd edition is available for purchase.