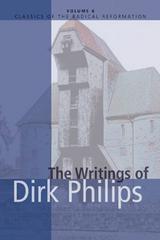 This volume contains all the known writings of key Anabaptist leader Dirk Philips (1504–68) translated into English from the Dutch of Philips’ original 1564 volume. It includes annotations and introductions making it useful both to general readers and to scholars. Philips’s treatises make important contributions to the literature of early Anabaptism. He writes about the incarnation, baptism and the Lord’s Supper, the sending of preachers, the tabernacle, the new birth, the ban and avoidance, and marriage.