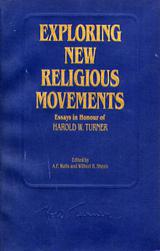 Turner's life work in documentation of new religious movements in primal societies changed the way the academic world understands religion. More widely, each period of his life and ministry contributed significantly to the study of religion and missiology.