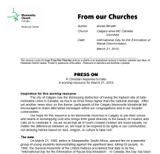 A Christian Response to Hate

The city of Calgary has the distressing distinction of having the highest rate of hate-motivated crime in Canada, as much as three times higher than the national average. After yet another news story on this theme, participants of the Calgary Mennonite Ministerial felt encouraged to share alternative messages within our congregations and in our broader communities.

Our hope for this resource is for Mennonite churches in Calgary (and beyond) to join their voices and hearts in worshiping God who brings forth great diversity in the beauty of creation and calls us to celebrate it. As we recall that all of God's created children are loved equally, no matter the differences between us, we hope to be inspired to be lights in our communities, not allowing hatred based on race, religion, or culture to take root.

On March 21, 1960, police in Sharpesville, South Africa, opened fire on a peaceful group of young students demonstrating against the apartheid laws, killing 69 people. In 1966, the General Assembly of the United Nations proclaimed that date to be the “International Day for the Elimination of Racial Discrimination”. In Canada, the Day has been recognized annually since 1989. It is fitting that we recognize this day in the liturgical season of Lent, as we confess who God is as the Creator who loves us, and confess also how we have not always responded to that love as God would desire.