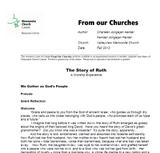 The Story of Ruth:

A worship liturgy, with dramatic script, on the story and themes of Ruth.

I imagine that long before it was written down, the story of Ruth emerged as gossip about the origins of their beloved king David: Have you heard the story of David’s greatgrandmother? Did you know she was a Moabite? It’s quite the story, apparently.

And the story is told, embellished, claimed and absorbed into Israelite self-identity:

For some, her story is a tale of an exemplary woman – modest, loyal and good. For some, it’s an example of the goodness that comes when people obey the law, as Naomi, Ruth and Boaz do. It’s a good example of how the poor can be cared for, through gleaning. How the widows are given an inheritance, through levirate marriage or kinsmen-redemption. It’s a story of the outsider brought in, an example of a foreigner being blessed by God, and even included in the lineage of kings. ( 7 actors, 60 min.)