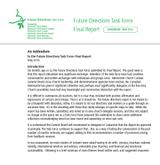 Addendum to Its Final Report

Six months ago, the Future Directions Task Force submitted its Final Report. The good news is that this report stimulated very significant exchange. Members of the task force have had countless conversations and written exchanges with individuals and groups since. Mennonite Church Canada General Board, Area Church leadership, and denominational agencies have reacted, the Canadian Mennonite has given it significant attention and, perhaps most significantly, delegates at the five Area Church assemblies have had very meaningful and constructive interaction with the report.

It is difficult to summarize all reactions, but it is clear they included both positive affirmation and expressions of concern and critique. That is as it should be. The future directions report is not meant to be a blueprint with absolutes; rather, it is meant to set out directions and markers as a guide through an uncertain time. It’s in the wrestling with these that clarity emerges on specific steps to take. While the report has been written, submitted, and voted on in area church delegate sessions, and thus not subject to change at this point, we as a Task Force have prepared this addendum to share some additional reflections acknowledging what has been heard and expanding on what was said.

It is understood the General Board will recommend to delegates in Saskatoon that the Report be approved in principle. The Task Force continues to support that. But, as a way of taking the conversation of the past number of months seriously, we suggest adding to that recommendation a number of provisions arising from feedback received.

In our assessment, six main clusters of concern were raised having to do with: process, structure, national identity, international relations and witness, vulnerable area churches, and financial and emotional sustainability. Following is a brief summary of main themes heard within each, and suggested responses.