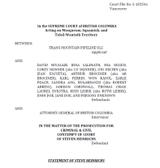 To Charge of Criminal and Civil Contempt of Court

On August 7, director of Indigenous-Settler Relations for Mennonite Church Canada, Steve Heinrichs, appeared before the Supreme Court of British Columbia and plead not guilty to the charge of criminal and civil contempt of court, a charge that he received as a result of his solidarity action with the Tsleil-Waututh land defenders who are resisting the expansion of the Trans Mountain pipeline. Steve read this statement in court, explaining his motivations for his action, and how such was not in contempt of court or “the rule of law” but in defense of fundamental indigenous human rights.

On August 8, after hearing the evidence presented by the crown and the statements presented by Steve, the judge concluded that “to break the law is not a privilege afforded to those who appeal to a higher call in protesting matters of social injustice. There are many other legal options available to those wishing to express their disagreement.”

Steve was found guilty and sentenced to seven days in provincial jail.