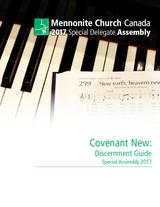 This booklet contains the discernment topics addressed at the 2017 Mennonite Church Canada Special Delegate Assembly. The Discernment Guide is intended to be a helpful way of visualizing the depth and breadth of the national church and the work that we do together.

This Discernment Guide contains documents central to discussion and decision-making at the Special Assembly. Immediately following is the Covenant New Report that summarizes the process undertaken since adoption of the Future Direction Task Force Report and Addendum at Assembly 2016 in Saskatoon, the results of the process, and the areas for input or decision-making.