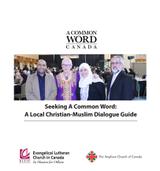 A Common Word invites Christians and Muslims to make their respective holy scriptures the primary locus upon which our dialogue is based. This is wisdom we do well to follow. While Christians and Muslims see the role which the scriptures play in their understanding and worship of God differently, in both of these faith communities scripture is a uniquely normative source of revelation. Placing the focus of our conversations in this context, we ensure that we are ‘keeping the main things the main things’ – i.e. talking to one another about the core elements of our faith rather than secondary or tertiary matters that can detract from the ‘main thing’.

However – and this is certainly a critical point for Christians – the dialogue between us is by no means exhausted by scriptural and theological discussion alone. Indeed, as people who stress the importance of the Incarnation of the Word in Christ, and of visible signs as instruments of truth and grace, it is easily argued that Christians are uniquely called to engage in what is sometimes described as the ‘dialogue of life.’ This means meeting real Muslim people face to face and growing in friendship; experiencing the way that faith informs their lives and decision making; seeing them practice their acts of prayer and devotion; and so on. It also means, where possible, finding ways to respond together to those in need. Not only do these things prevent us from relying on abstract Seeking A Common Word: A Local Christian-Muslim Dialogue Guide 6 stereotypes and misrepresentations, they also help to create an environment of greater trust and generosity towards one another. From there, more challenging issues may be faced effectively. These components, therefore, are also built into the A Common Word ethos, and into the model of Muslim-Christian dialogue which it proposes.

It is significant, therefore, that A Common Word has seen such considerable endorsement and engagement, much of it jointly, from Roman Catholics, Eastern Orthodox, Oriental Orthodox, Anglicans, Lutherans, Mainline Protestants, Evangelicals, and ecumenical organizations like the World Council of Churches, the National Council of Churches in the US, and so on. Thus, while this present resource has its origins in the Anglican Church of Canada and the Evangelical Lutheran Church in Canada, members of these churches should be mindful to take every opportunity to venture into relationships with Islam with their fellow Christians closely at their side. In Canada, this especially includes (though is not limited to) our Roman Catholic, United Church of Canada, Presbyterian Church in Canada, and Mennonite Church Canada siblings, each of which have responded to and interacted with the A Common Word initiative in positive ways. In this call to us, therefore, our Muslim neighbours are also thereby providing us with an ecumenical learning and growth.