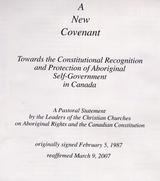 In 1987 church leaders issued "A New Covenant," a landmark ecumenical statement on Aboriginal rights. It called for a new relationship between Aboriginal and non-Aboriginal peoples, one based on a recognition of the inherent right of Aboriginal peoples to be distinct, self-determining nations with rights to an adequate land base.

Signed by the churches that now form KAIROS: Canadian Ecumenical Justice Initiatives, "A New Covenant" acknowledged the impact of centuries of colonialism and discrimination, and sought to set right historical injustices by calling on Christians, those of other faiths, "and all people of good will" to continue advocating and working in solidarity to generate "public awareness and support for the full recognition and implementation" of Aboriginal rights in Canada. The covenant affirmed the churches' ongoing work in collaboration with Aboriginal peoples on Aboriginal rights and justice issues, as well as the long journey that lay ahead.

To commemorate the statement's 20th anniversary, church and Aboriginal leaders will gather for a ceremony and press conference in Winnipeg on June 21, National Aboriginal Day, during the Anglican General Synod and the National Convention of the Evangelical Lutheran Church in Canada, to celebrate joint successes and accomplishments, and to demonstrate that the churches and Aboriginal peoples continue to be inspired by the spirit of A New Covenant and its vision of a new relationship based on sharing, mutual respect, and the recognition of rights and responsibilities.

The various church denominations and agencies have also recommitted themselves to draft and sign a New Covenant by December 2007. This new covenant will be written as a collaboration of the churches and Aboriginal organizations.