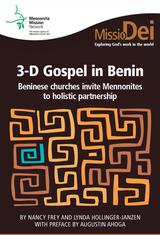 History is generally defined as a recital of past events, but here is an account of historical happenings whose wheels continue to roll forward. While we wait for a Beninese author to write from an authentically African perspective, Nancy Frey and Lynda Hollinger-Janzen dove into the water and tried to swim upstream into the past, even though they were not present at the beginning of this partnership. And none of us can imagine what lies downstream in the future, because the fruits of the Mennonites working alongside Beninese brothers and sisters have only just begun to ripen.

Despite the limitations, these two women have written a history that stirs emotions because they both lived in Benin as true biblical, non-paternalistic missionaries. They, with their colleagues, worked in the African context and tried, as much as possible, to make these realities their own. We hope that readers, removed by geography and time, will be able to discover what God has done for the church through redeemed lives in Benin, Europe and North America.