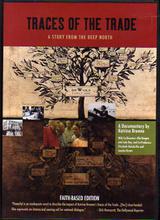 Traces of the Trade:

A Story From The Deep North

In Traces of the Trade, Producer/Director Katrina Browne tells the story of her forefathers, the largest slave-trading family in U.S. history. Given the myth that the South is solely responsible for slavery, viewers will be surprised to learn that Browne’s ancestors were Northerners. The film follows Browne and nine fellow family members on a remarkable journey which brings them face-to-face with the history and legacy of New England’s hidden enterprise.

From 1769 to 1820, DeWolf fathers, sons and grandsons trafficked in human beings. They sailed their ships from Bristol, Rhode Island to West Africa with rum to trade for African men, women and children. Captives were taken to plantations that the DeWolfs owned in Cuba or were sold at auction in such ports as Havana and Charleston. Sugar and molasses were then brought from Cuba to the family-owned rum distilleries in Bristol. Over the generations, the family transported more than ten thousand enslaved Africans across the Middle Passage. They amassed an enormous fortune. By the end of his life, James DeWolf had been a U.S. Senator and was reportedly the second richest man in the United States.

This DVD also includes the short film Repairing the Breach: The Episcopal Church and Slavery Atonement (31 min), an overview of the Episcopal Church's complicity in slavery, and that shows this Church's process of coming to terms with that history in 2006-08. This resource can help further dialogue and work towards racial repair.

“A far-reaching personal documentary examination of the slave trade … The implications of the film are devastating.” — Stephen Holden, The New York Times