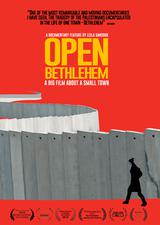 A Big Film About a Small Town

Film director Leila Sansour returns to Bethlehem to make a film about her hometown, soon to be encircled by a wall. After leaving the city as a teenager thinking that Bethlehem was too small and provincial, she never wanted to return, but this time is making an exception. Sansour intends her film to be a tribute to her late father, founder of Bethlehem University, and a man regarded as a hero by his townsfolk. But as Bethlehem approaches ruin, her decision to flee this sleepy town, taken much to her father’s regret, comes to haunt her.

Open Bethlehem is a story of a homecoming to the world’s most famous little town. The film spans seven momentous years in the life of Bethlehem, revealing a city of astonishing beauty and political strife under occupation. While telling a personal story, the film charts the creation of a campaign to compel international action to bring peace to the Middle East.

As the credits roll, there is snow over Bethlehem. Sansour's plan to stay a year stretches to seven--she has stayed long enough to realize that she is home for good. Sometimes, the biggest dreams take flight from the smallest places.

"One of the most remarkable and moving documentaries I have seen. The tragedy of the Palestinians encapsulated in the life of one Town--Bethlehem." - Jon Snow