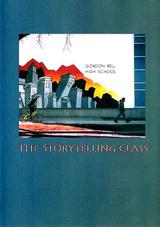 Located in Winnipeg's downtown core, Gordon Bell High School is probably the most culturally varied school in the city. One recent survey found 58 different languages spoken by the student body.

A large percentage of this diverse population is made up of children who have arrived as refugees from various war torn areas of the world. Traumatized by violence and displacement and experiencing culture shock in Canada these immigrant children face challenges that are not easily understood by their Canadian classmates.

In an effort to build bridges of friendship and belonging across cultures and histories, Marc Kuly, a dyamic young teacher at Gordon Bell, initiated an after-school storytelling project whereby the immigrant students would share stories with their Canadian peers.

The catalyst for this cross-cultural interaction was the students’ reading of A Long Way Gone by Ishmael Beah. The book is a memoir of Beah’s horrific time as a child soldier in Sierra Leone’s civil war and how difficult it was for him and similarly traumatized children to be rehabilitated after the war ended.

One week, during the course of Marc Kuly’s storytelling project, Beah and his American adoptive mother, Laura Simms who is a renowned professional storyteller, were both in Winnipeg and they agreed to meet with the students to talk about the healing power of storytelling. With their help the students learn to listen to each other and find the commonality that had so long eluded them.

By turns poignant, uplifting, angry and humourous, The Storytelling Class is a remarkable testament to the resilience of the human heart and its infinite capacity for forgiveness and redemption.

"Gordon Bell High is comprised of rich and poor, aboriginals, Afghans, Arabs, Africans, refugees for war-torn countries, immigrants, and a recent influx of Burmese students. Much of the film portrays students talking about their ethnicities and races and how stratified and segregated the school is...Marc Kuly, a teacher, set out to bring students together...The experience 'was like wildfire spreading through the school. Kids loved it.' Recommended." - Caron Knauer, La Guardia Community College, Educational Media Reviews Online