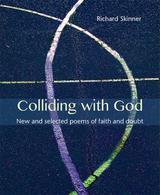 New and selected poems of faith and doubt

Colliding with God,
and wearing no seat-belt,
he suffered extensive injuries
to his life.
They say he is not the same man
since the accident.

God, too, did not escape unscathed,
but received nasty wounds
to his hands and feet,
and a deep laceration in his side.
His condition is said to be critical,
and a full recovery
is unlikely.

Neither party is covered by insurance.

The subject matter of Richard Skinner’s poetry starts with the Tree of the Knowledge of Good and Evil in the Garden of Eden and concludes with the events of the first Easter, taking in on the way Julian of Norwich’s hazelnut, Mastermind, God as a blizzard, and the eighth deadly sin. A psalm based on the New Testament and a modern take on Epiphany are included, along with a dozen new Invocations. Both witty and reflective, the poems will appeal to a wide range of readers.