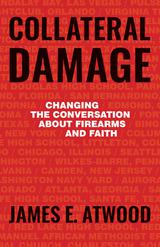 Changing the Conversation about Firearms and Faith

In Collateral Damage, pastor and activist James E. Atwood issues an urgent call to action to Christians to work together to stop gun violence. An avid hunter for many years, Atwood enumerates the tragic and far-reaching costs that accrue in a country with more guns than people. Collateral damage includes a generalized fear and loss of trust. Suicides and homicides. Trauma for children in neighborhoods plagued by gun violence and in schools with frequent lockdown drills. A toxic machismo that shapes boys and men in unhealthy ways. Economic costs that exceed $229 billion per year. Atwood also considers the deeper story of racism, inequality, and mass incarceration in which the conversation about gun violence is lodged.

Gun violence has been called the theological emergency of our time. The church has a moral and spiritual obligation to side with life against death. Will we rise to the occasion?

"James Atwood has written a faith-based summons to act in hope, to refuse the collusion of despair, and to take faith seriously enough to make a difference. This book is urgent for all those who care about the future of our society and are ready to act." -- Walter Brueggeman, Professor Emeritus at Columbia Theological Seminary

"I recommend that congregations who feel hopeless and powerless in confronting gun violence in our society read Collateral Damage together. You will be inspired--and changed." -- Katie Day, Charles A. Schieren Professor Emerita of Church and Society at United Lutheran Seminary in Philadephia