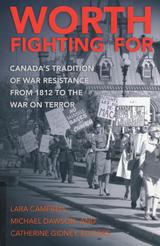 If you have taken a recent Canadian citizenship test, attempted to answer a Dominion Institute history quiz, charted a course through Ottawa's public museums, relaxed on your couch in front of any number of History Television or CBC prime time offerings, or walked through the aisles of any major bookstore, you will be well aware that the experience of war is a fundamental category of Canadian history.

This collection was conceived in part as a response to the current acceleration of military commemoration. But its broader aim is to help recalibrate our understanding of Canadian history by documenting Canada's long tradition of war resistance. The chapters tackle vastly different topics including pacifist campaigns to secure war service exemptions, anti-imperial dissent, protests against the sale of children's war toys, anti-nuclear demonstrations, assistance for American draft-dodgers and military deserters during the Vietnam, Iraq, and Afghanistan wars, and the inclusion of antiwar perspectives in public schools.

Taken together, these chapters highlight three key points: they underscore the consistent presence of an antiwar tradition in Canada; they speak to the wide-ranging and complex nature of this resistance; and they encourage us to grant war resistance a central place in Canadian history.

Includes chapters on the Historic Peace Churches during War of 1812 (by Jonathan Seiling) and Second World War (by Conrad Stoesz).