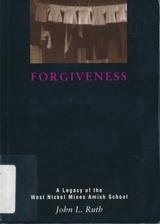 A Legacy of the West Nickel Mines Amish School

This meditation on the horrific events of October 2, 2006, reflects on the response of the Amish community of Nickel Mines in Lancaster County, Pennsylvania, where a gunman killed himself, five school children, and wounded five others. The tragedy evoked worldwide expressions of shock and sympathy. But the world was stunned when the Amish community, in the midst of its grieving, offered words of forgiveness toward the dead killer and his family.

While many wondered where God was in the little country school house, the Amish recognized a biblical calling to minister to the killer's family and extend Christ's healing. John L. Ruth considers that the extraordinary Christian forgiveness shown by the victims remains the legacy of that heart-breaking day.